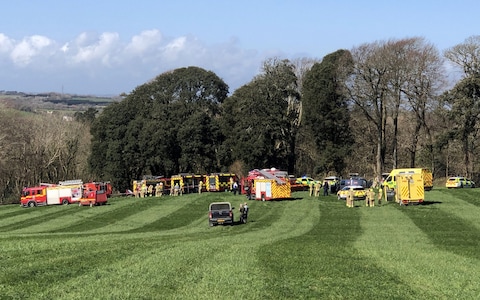 Witnesses described two crew being “safely ejected” from the plane using parachutes and an investigation has now been launched.

Two medical helicopters were also reported near Lizard’s Point in Cornwall, the most southerly point of the British mainland.

A statement from the Ministry of Defence  said: “Two pilots are being checked by medics after ejecting from a Royal Navy Hawk aircraft from 736 Naval Air Squadron during a flight from RNAS Culdrose. An investigation will begin in due course. We won’t be providing further detail at this time.”

The Telegraph understands the aircraft in question was a Hawk T2 variant – based from RAF Valley in Anglesey, with the Red Arrows – and the only remaining Hawk in service after the T1 was cut in the defence review.

It was part of the 736 Naval Air Squadron, flying from Royal Naval Air Station Culdrose and the crash happened near there.

Both pilots ejected and their injuries are unknown, but they were seen walking away, according to sources.

It is understood the plane crashed on land.

The 736 is an aggressor squadron, and are regularly used to simulate enemy fighter jets to test the Navy’s vessels’ operational readiness.

These drills – known as Thursday War – occur on Thursdays, and it is likely that the Hawk was part of these training exercises.

Devon and Cornwall Police said: “Emergency services are currently in the St Martins area of Helston following reports of a plane crash. Public are asked to avoid the area whilst first responders attend the scene.

“Two people have been treated by ambulance at the scene and will now be taken to hospital. Their injuries are not currently thought to be life threatening or changing.”

One of the fan blades in the plane engine that failed shortly after take-off in Denver showed signs of metal fatigue, investigators say.

The National Transportation Safety Board (NTSB) said the blade would undergo further examinations.

Flight 328 was able to make an emergency landing at Denver airport on Saturday, but parts of the engine fell on homes. No-one was hurt.

Boeing has recommended grounding all its 777 aircraft with the same engines.

What Made the Indonesian Plane Crash? New Report Sheds Light

In a preliminary report on Sriwijaya Air Flight 182, investigators said the crash might have been caused by several factors, including a problem controlling the engines’ thrust. 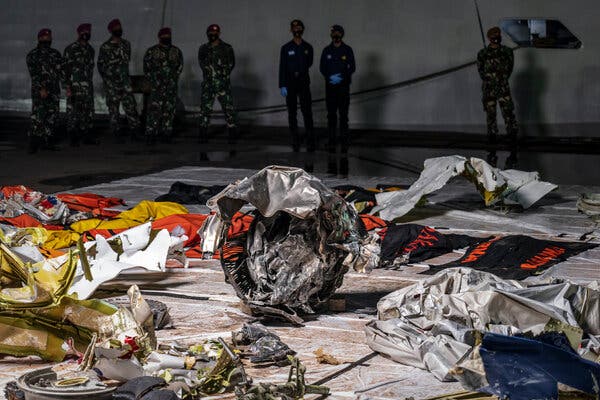 BANGKOK — A preliminary investigation into the crash in Indonesia last month of Sriwijaya Air Flight 182 has found that a difference in the level of thrust between the plane’s two engines may have contributed to the aircraft rolling over before it plunged into the Java Sea, investigators said Wednesday.

As in most crashes, the investigators are looking at a range of factors that may have contributed to the cause. They are assessing information from the flight data recorder and the plane’s maintenance records, but searchers have not recovered the cockpit voice recorder, which would tell them what the pilots were saying in their final minutes.